Use coupon code "10off" to receive 10% off your first order. Combine with code "freeship" for orders over $100.
Sale!

Why Is Glutathione Depletion Harmful?

GSH deficiency is associated with a number of central nervous system diseases such as Multiple Sclerosis, Autism, Bipolar disease, Alzheimer’s, and Parkinson’s disease. Specifically, in Parkinson’s disease (PD) a drop in GSH is often one of the first signs of the development of disease due to the fact that an absence of the antioxidant causes nerve damage, cell death, and oxidative stress. Through innovative research, scientists have been testing the use of GSH in Parkinson’s disease. However, the chemical composition of GSH does not allow it to be taken orally for central nervous system diseases because little to none crosses the blood-brain barrier. Therefore, an
innovative dosage form needed to be tested. In a study done in 15 patients with PD, 200 mg of GSH was given intranasally and showed that GSH levels did not only raise, but the levels remained high even 1 hour after administration. This study showed that in order for GSH to reach its target tissues, the intranasal spray is an effective and non-invasive approach.

How much is in each spray? 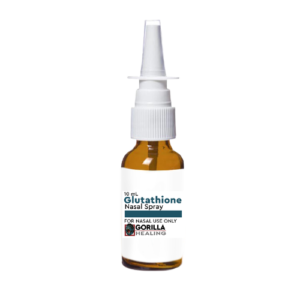